Each UFC fighter who reaches the pinnacle of the sport and wins the championship receives a golden belt. The belt itself is worth around $330,000 and many people wonder, do UFC champions get to keep these expensive belts? Do they receive a new one each time they defend the championship?

The answer is yes, UFC champions are allowed to keep the belts in their possession, no matter what happens next. Even if they lose, vacate, or get stripped of the title, they will keep the belts. But as of 2019, they no longer get a new belt to add to their collection each time they defend the title.

Keep reading this article to learn more about the UFC’s belt system. You will also learn the worth of the UFC belt, the materials it is made from, and who are the fighters who hold most belts in their collection.

Why Are UFC Fighters Allowed To Keep Their Belts?

The UFC enables fighters to keep the belts in their possession as this represents a trophy. A reward they earned through hard work and years of competition. The belt signifies their journey, sacrifice, pain, and all the ups and downs they needed to go through to win it.

In comparison, Olympic gold medalists keep their medals. Super Bowl and NBA winners their rings, and MMA athletes their belts. Having the belt in your possession represents your legacy and depicts your career.

UFC has 12 weight classes in total (eight for men and four for women) and there is one title holder per division. When a titleholder loses to a challenger, they will lose their championship status but will keep the belt in possession. A challenger who is now crowned the champion will receive a new one from the UFC.

This has been a tradition since the introduction of the UFC belts in 2001. Through the years, the rules and design of the belt have changed a lot, but fighters are still enabled to keep their belts. This means that, even if they lose the title or retire, they will always keep the belt in their possession. 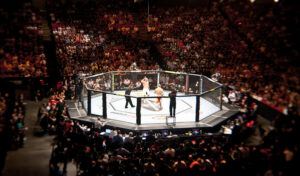 Do UFC Fighters Get a New Belt After Every Title Defense?

As of 2021, the UFC fighters will no longer receive new belts after each title defense. Instead, the legacy belt has eight cubic stones on each side, 16 in total. Each time a champion defends the title, one cubic stone would be replaced with a zirconia stone.

In case a fighter defends the title more than 16 times, they will surely receive a brand new belt.

Up until 2019, UFC champions received a brand new belt each time they successfully defended their title. However, the promotion decided to get rid of giving new belts each time due to budgetary issues. The cost of production of a new classic belt was simply too much for the company.

The cost of making just one classic belt was around $200,000. Combining this with the fact that the UFC needs at least 12 new belts per year, you get that they had to spend $2.5 million on belts only, if not even more.

For example, Demetrious Johnson, the most successful flyweight in history, had defended his title 10 times in his career. However, the company gave him just one classic belt and he needed to file a dispute in order to add another nine others to his collection. Considering the price of a single one, Johnson’s dispute was worth around $2 million.

As of 2019, the UFC is using a new “legacy championship belt” that apart from looking futuristic, also includes some very interesting and unique features.

The legacy belt has a more innovative design compared with the classic belt, which included only the UFC logo on one big center plate. Each legacy belt is custom made and tells a story which ultimately makes it more expensive than the classic one.

How Many Belts Can UFC Fighters Win?

UFC fighters can move up and down in weight classes and become undisputed champions in multiple weight divisions. They can also simultaneously hold titles in two or more separate weight classes. Even when they lose both titles, they will keep the physical belt with them.

However, the gap between the weight classes ranges between 10–20lbs. They first need to win the title in one division and earn a shot at the belt in the upper or lower weight class. So achieving a double championship status is very hard. In fact, only a few fighters have managed to achieve this in MMA history.

The first fighter who managed to hold titles in two separate weight classes was Conor McGregor. In 2015, he beat Jose Aldo in just 13 seconds to win the featherweight crown (145lbs). And two years later, he would finish the lightweight (155 lbs) champion Eddie Alvarez at UFC 205 to capture the second belt.

On the other side, there have been a couple of fighters who manage to win titles in two separate weight classes, but not simultaneously hold the belts.

Do UFC Interim Champions Get To Keep Their Belts?

When an undisputed champion is inactive due to an injury, contract dispute, or other reason, the UFC would create an Interim belt. They will book the two highest-ranking contenders within the weight class to compete in a championship bout where the winner becomes an Interim champion. He/she receives the same physical belt as an undisputed champ, but their status is different.

In order to become undisputed, they must wait for the champion to come back and beat them in the title unification bout. Win or lose, both fighters get to keep their physical belts.

Which UFC Fighter Has Most Belts in Their Collection?

George St. Pierre (GSP) is the fighter with the most physical UFC belts in his collection, 13.

Between 2001 and 2019, the UFC used a classic belt system where each champion received a brand new physical belt after each title defense. As a result, many dominant fighters from that era have multiple belts in their collection. Here are the most famous ones:

Do UFC Fighters Lose Their Belts?

Following the popular UFC events or other MMA content, you can often hear commentators and other experts saying “the champion has lost the belt to a challenger”.

But by this, they do not think of a physical belt, as the champion is allowed to keep it in their collection. Instead, they refer to their championship status. Rather than saying “champion lost his/her championship status to challenger B” they would say “they lost the belt”.

No matter in which way they lose their championship status, they get to keep the physical belt in their possession.

How Much Is The UFC Belt Worth?

The UFC legacy championship belt is worth around $330,000. It is 8 pounds heavy out of which 2 pounds is pure gold, and each belt also has other precious materials such as zirconia stones. The UFC also sells identical replicas for around $1000.

The exact price of the real belt is yet to be known as only the UFC knows the cost of producing a single, authentic one for each fighter. And, the price of each existing belt differs depending on the number of red stones.

For example, Kamaru Usman, the former welterweight champion, defended his title five times and his belt has five red stones. Usman’s belt is worth much more than Glover Texeira’s who lost the title in his first defense. Or in other words, the price of the belt goes up with each successful title defense.

Lastly, each belt is unique and customized and there are no two same belts, which significantly increases the price.

Every sport in the world has some type of trophy and reward athletes compete for, and in MMA, that’s the UFC belt. However, the belt is not just a piece of leather and gold, it has a much deeper meaning.

UFC golden belt represents a unique journey each fighter needed to go through to climb all the way to the top. It represents their sacrifice, pain, sweat, blood, and even tears, and it is a trophy they get to keep for the rest of their lives. That’s why most of them experience emotional breakdowns each time the UFC president Dana White wraps a belt around their waist.