When you do BJJ training, you would think that a bunch of people are rolling on mats with their gis, right? It originally started in that way, however, there are also many people who prefer no-gi training and they think that it is the right way.

But why is that and what is the difference? Why some people believe that training with BJJ gi is superior and some people think the exact opposite.

There are actually many differences between with these two and in this content, you can find all about them. 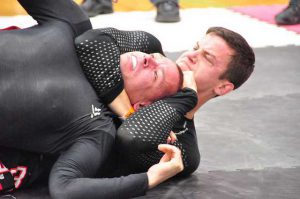 Well, no one walks around with a gi but have you seen anyone who wears a rash guard and spats while hanging out in a coffee shop? Well, I have not. With that, everyone wears some kind of fabric so gi is actually more realistic.

Many BJJ gyms give self-defense lessons and there are generally gi classes for that. Since in daily life, people wear some kind of fabric and it actually mimics “the real situation” more.

Also, you can even see that there are many people who wear jacket and pants.

However, you should keep in mind that no-gi grips, holds always work.

So if you want to learn self-defense, training both of them will help you more.

An interesting fact is that because of bullying there are many kids who skip classes in schools. Some children also want to start their jiu-jitsu journey at young ages. So there are many kids classes in BJJ gyms as well. There are even BJJ DVDs which teach kids how to defend themselves. And according to my research, these always focus on training with a gi.

Belt System: If you want to get in the belt system guys there is no other way around you need to wear a kimono.

Competition: I am not getting into this in this writing but as you may have already guessed that these competitions (gi and no-gi tournaments) have different rules. For example, you simply can not do heel hook in a gi tournament.

Do You Train MMA?

Alright, some gyms focus on giving only gi BJJ training (lessons, courses etc.). So this can be an obvious problem for people who train for MMA. Since your opponent doesn’t even wear a gi to hold and learning it won’t give you an advantage. Even though there are many MMA fighters who roll on mats with a gi, they rarely do it so you should focus on training without a gi.

My Experiences: As you may know this from the social media, I also do MMA training and I had 5 instructors so far which I really trust and they also said that I should generally do no-gi BJJ training as well. Also whenever I observe no-gi guys, there is always a scramble and people seem to count on slippage more however in gi training, people tend to focus more on the technique. But as I said this is my observation.

However, I also did a thorough research and many authoritative jiu-jitsu practitioners and instructors think exactly the same including John Danaher.

An interesting fact is that as you may know, most of the greatest practitioners, champions, shortly successful grapplers generally did their training sessions with BJJ gi and in my opinion, this tells a lot.

Why is Gi BJJ Training recommended for beginners?

Alright, even lightweight A0 model gis are around 2.5 Lbs. and I am talking about the lightest ones (some models of Vulkan, Scramble, Hayabusa etc.). So it slows down the action a lot and gives you time to react for gripping, defense etc. This is actually the main reason why it is recommended for beginners. 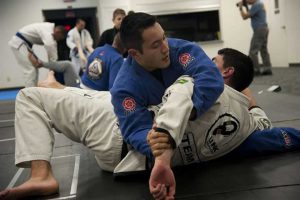 Did you think about this before?

When you don’t wear a gi, it is easier to escape due to slippage and while you are wearing a gi, it basically does not exist. So in order to escape you need to learn to control your body and center of mass. And once you do, you will get better at defense and it will eventually benefit both gi and no-gi BJJ training.

If you prefer doing gi training, have a look at these best BJJ Gis.

However, if you prefer doing no-gi training, have a look at these best BJJ rash guards. After all, many gyms especially MMA commercial gyms don’t let you do it without wearing one so you can avoid rashes, infections, scraps etc. while rolling on mats.

Also even if you train with a gi, if you wear a rash guard, it will improve your kimono’s durability significantly!

Even your gym can affect your decision! Yeah, I have been training in Thailand for years now and I saw that many people in martial arts gyms prefer doing no-gi BJJ training due to lack of air conditioners. And here many local gyms don’t have one.

Ladies and gentlemen, as you may know, this discussion has been made a myriad of times and some people believe that you should do no-gi BJJ training and the others strictly believe that when you grapple, you should wear a gi. And what I am seeing is a polarization and I seriously don’t like it.

As you can see both of them are good in some ways and according to your need you may want to do one of them more. For example, I do MMA training and obviously, I need to do mostly no-gi BJJ training. However once in a while, I also train with a kimono. So my advice is that definitely do both of them. However, set the frequency of these according to your need! For example, if you plan on competing in UAEJJF Grand Slams, which is a BJJ gi only tournament, obviously train mostly with a gi.

I hope that I made myself clear and this writing is informative for you and if you have anything to add just share your thoughts below and let’s have a discussion.

Image Courtesy of MartialArtsNomad.com and VANCE AIR FORCE BASE via Creative Commons License, Some Rights Reserved

8 thoughts on “GI vs No GI BJJ Training – What is the Difference?”