Watching the popular UFC or other MMA events, you can often see a match ending in a “no contest”. This might be confusing to people who are not that familiar with the official rules and all types of decisions. That said, what does the no contest (the NC) mean in the UFC? 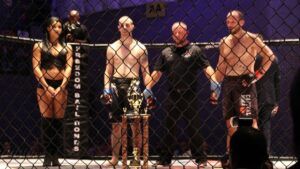 In a no contest, neither fighter gets the win or receives any penalties.  Keep reading this article to learn more about no contest rule in MMA, and some unique information about it.

What Causes No Contest In UFC?

The most common cause of fights ending in No Contest is the accidental illegal strike. Once one of the fighters’ lands, for instance, an illegal eye poke, the referee would instantly stop the fight. They would send the fighter to the neutral corner, issue a verbal warning, or deduct a point. The injured fighter will get up to five minutes to recover and continue. The referee may also ask the ringside physician to come in and check the injury and decide whether the fighter is medically clear to continue or not.

If an injured fighter is unable to continue because the damage is too big, the referee would stop the fight and declare a no contest. Bear in mind that NC (no contest) is valid only if the illegal blow lands without any intention and was accidental. If the shot lands on purpose, then the win would be awarded to the injured fighter. It’s up to the referee to decide whether the shot was intentional or unintentional.

Here is a list of illegal strikes in MMA that might contribute to no contest ending of a match:

The other, not that common cause is when one of the fighters’ tests positive for using prohibited substances (PEDs). In that case, the match would end in a regular outcome. But, once the winner of the match pops up positive for using PEDs (days or months after the event) the commission would overturn the official decision to “No Contest”. One such case was when Jon Jones beat Daniel Cormier at UFC 214. Later, Jones tested positive for steroids and the commission overturned a decision to no contest.

Do Fighters Still Get Paid After The Fight Ends In No Contest?

UFC fighters, for example, still receive their money even if the match ends in a no contest. Even if the fight ends within the first minute, they will receive money, but not all of it. They can also cash out the post-fight bonuses for the “fight of the night” which is $50.000 in the UFC. At times even more than that.

However, bear in mind that they are paid only their “show money”, which is the money each fighter gets for making weight and showing up to a fight. They will not receive any win bonuses, which according to most UFC contracts may double your show money income. For instance, they may get $50.000 to show up, and another $50.000 if they win (which they won’t get in a no contest).

Fighters who fail a drug test for using PEDs receive the full amount as the test results come after the bout. Despite testing positive, they receive both the show money, the win bonus, and the post-fight bonus without having to give the money back. Sounds a bit unfair, but that’s how it works in most major promotions such as the UFC.

Does No Contest Impacts UFC Fighters’ Rankings And Career?

A fighter who lands an accidental blow that results in a no contest would not receive any penalties from the UFC or commission. They will also not lose their place in the official rankings, or not directly because of the no contest. As for the injured fighter, the consequences truly depend on the severity of the injury.

In some cases, they might need just a couple of days to fully recover and get back to training. In this scenario, the promotion might re-book the fight for one of the upcoming events within a month or two. But it actually often happens that an injured fighter must take a long layoff, and even undergo surgery to fix the damage.

Last but not least, “no contest” is the outcome that does not do any good to anybody. First, it’s disappointing for the fighters who have spent months preparing for a fight, and it stops their progress up in the rankings. Second, it puts the promotion in a weird situation as they now need to either re-book the fight or find new opponents. In the end, the fans want to see a fighter winning because that is part of the entertainment.

Examples Of No Contest In the UFC

Throughout UFC history, there have been many fights ending in a no contest, including the high-level ones. Following is a list of some of the most memorable UFC no contests:

At UFC 183, Anderson Silva faced the fan-favorite Nick Diaz in what ended up being an epic clash. The fight went to distance with Silva taking home a clear unanimous decision win. But just a couple of months later, both fighters would fail drug tests with Silva testing positive for steroids, and Diaz for marijuana. As a result, the commission overturned the decision to no contest.

The first match between these two was an epic brawl that unfortunately ended as a no contest. After a high pace action in round one, Alvarez was on a mission to close the show in the second. At one moment, he got Poirier up against the fence and started unleashing a barrage of strikes. However, he landed 3 illegal knees and after Poirier was unable to continue, the fight ended as a no contest.

In his fourth UFC fight, Hardy faced Ben Sosoli in a fight that ended as a no contest due to the bizarre incident. Between the rounds, Hardy used the inhaler, and he went on to win a unanimous decision. What he didn’t know, neither his coaches was that using an inhaler is not allowed according to rules.

All the way throughout the fight, O’Malley was extending his long arms to protect his range and find Munhoz with long-range punches. In the first round, he landed an eye poke from which Munhoz managed to recover. But then he landed another one in the second, which completely closed Munhoz’s eye. The doctor determined Munhoz is unable to continue, and the referee declared a no contest

Is No Contest The Same As a Draw?

No contest outcome is not the same as the draw because the match got stopped before its completion. In a draw, the fight has to go to full distance and at least 2 of the 3 judges need to score it that way. Only the referee and the commission have the power to call the no contest, judges do not have anything to do with this.

What Happens To UFC Bets If The Fight Is No Contest?

If a UFC fight ends as a no contest, most placed bets will be void and people will get their money back. The only exception is when you place a bet on a fighter to win round 1, and the fight gets stopped and ruled no contest in the 2nd or 3rd round. In this case, you will either win or lose money after the first round, and no contest will not influence your bet either in a positive or negative way.