The UFC introduced the concept of rankings in 2013 as a way to make it easier for fans to navigate through each weight class and discover the best fighter within a division. But how do UFC rankings actually work? Who are the people voting on the rankings?

The UFC rankings are voted on weekly by a panel of around 20 credible media members who all work with the largest MMA networks worldwide. Each week, they vote on who they think are the top 15 fighters in each of the 12 UFC weight classes. They also vote on the “pound for pound” list to determine the best fighters regardless of weight class.

This is just a brief explanation of how UFC ranking work so be sure to read the rest of the article to learn more.

How are UFC Rankings Determined?

The only fighters they do not vote on are champions, both undisputed and interim. It’s considered that champions are the best fighters within each weight class so the 1# ranked fighter is actually a title contender, not the champion.

In a recent article of mine, I explained the meaning of undisputed champion and included the best undisputed UFC fighters as well.

The judges who have the right to vote on the UFC rankings do not have to follow any rules and their work is completely independent. Their votes are based on their subjective opinion and are not in any way influenced by the UFC, or that’s how it is supposed to be on paper. The only rule they must follow is to submit the votes within 48 hours after the last UFC event.

They determine the fighters’ position in the rankings by looking at the factors related to their performance inside the octagon. Some factors they take into consideration are records, recent results, activity, methods of victory, and how dominant they were. But possibly the most important factor is the quality of opponents they have beaten or lost against. 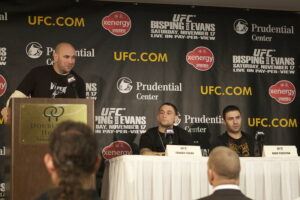 Who Votes on UFC Rankings?

The UFC is not transparent when it comes to who are the people who have the right to vote on the rankings. Back when the concept was introduced in 2013, there were 100 journalists and other media members from the sport of MMA, and you could find their names on the official UFC website.

But over the years, the number of people has significantly decreased to only 20 media members and for some reason, the UFC decided to no longer keep their names public. Why they have decided to do this stays open for debate.

What’s sure, however, is that the voters are not based in US only. Media members from other countries where MMA is well developed such as Brazil, Russia, Australia, and Canada all have the right to vote on the rankings.

Following is a list of 14 media members who confirmed they worked or are still working as voters and the media networks they are associated with:

How Often Does UFC updates Rankings?

The UFC rankings are updated every week regardless if there was an event or not. Each member of the media who is given the right to vote must submit their votes within 48 hours after the last UFC event, usually on Monday. On Tuesday, the UFC will update the rankings on their official website and apply the changes.

Fighters can either move up or down in ranks or hold the same spot as before the voting. For example, if the #7 ranked fighter beat the #5 ranked opponent on Saturday, the media members would probably vote for the #7 fighter to move up to the 5th place, while the #5 ranked fighter would drop to the 6th or 7th spot.

But if, for instance, a #4 ranked fighter beat the opponent ranked below them, #8 for instance, they would probably maintain the same spot in the rankings. In order to move up the lathers, they must beat a higher-ranking opponent.

There are many variables and possible scenarios so bear in mind this is just a brief explanation of how it all works in practice.

What Does Pound for Pound Mean in the UFC?

A pound-for-pound ranking list includes only the 15 best fighters from all weight classes. The list usually consists of titleholders from all 12 UFC divisions (both men and women), and three other athletes, usually former champions who are still active and dominant.

Apart from the UFC, a couple of other media networks such as Sherdog, Tapology, and ESPN have their own unofficial lists.

The #1 ranked pound-for-pound fighter is the best and usually the most dominant athlete regardless of the weight class. In theory, they must face and beat champions from all other weight classes to become P4P best. But such a thing is impossible in modern times.

The Athletic Commission would never allow a heavyweight fighter to face a champion of the welterweight or lightweight division. Such a freak show is fraught with danger and ever considered suicidal for fighters from lower weight classes.

But how are UFC pound-for-pound rankings determined then?

How Are UFC pound-for-pound rankings determined?

The pound-for-pound rankings are voted the same as for weight classes and by the same panel of 20 journalists and media members from the MMA industry. The rankings are also updated by the UFC every Monday or Tuesday.

To determine the 15 pounds-for-pound best UFC athletes, the panel of voters takes different factors into consideration. They search for the most dominant fighters who have been on long win streaks, champions in most cases. Next, they look at how active these fighters are, how many title defenses they have, the quality of opposition they faced, and many other factors.

It’s worth pointing up that there are no rules or criteria voters must follow. Their votes are completely based on their subjective opinion, and maybe their own criteria they follow. 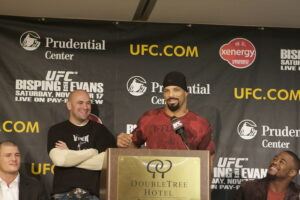 Can a Lower Ranked Fighter Compete for the UFC Title?

In theory, the #1 ranked fighter in a division is the next in line to challenge the champion. However, if they are unable to compete due to injury, contract dispute, or other reasons, the UFC will give the shot to the #2 ranked fighter or whoever deserves the chance to fight for the belt.

The best example was when Conor McGregor got the chance to fight for the lightweight title against Khabib Nurmagomedov in 2018. After beating Eddie Alvarez in 2016 to become a double champion, McGregor went on a boxing venture with Floyd Mayweather and was inactive for two years. In the meantime, he got stripped of his titles and dropped a couple of places in the rankings. But he still got the chance to fight against Nurmagomedov the moment he came back. 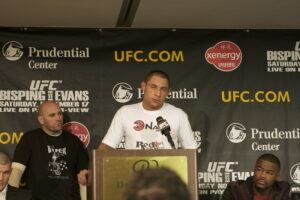 The UFC ranking system is a valuable tool, but, the system is far from ideal. In fact, there are a couple of important flaws within the system that make the rankings slightly “unreliable” in the eyes of the fans. Here are some of the biggest ones:

There is a clear lack of criteria or standards of any type when it comes to rankings. Giving the media members full freedom to express their own subjective opinion not influenced by the UFC or other parties is fine.

However, there must be a certain number of criteria they should use or at least a pattern they should follow when it comes to certain scenarios. For example, all voters have their own views on inactive fighters and differently handle their place in the rankings. Some voters would drop an inactive fighter down or out of the rankings, while others might decide to give them more time, which often creates confusion.

The UFC is not transparent when it comes to people who are given the right to vote. Back in 2013 when the rankings got introduced, you could find all the names of the people from the voting panel on their official website. But this is no longer the case and it is almost impossible for one to discover who these people are.

As a result, the majority of fight fans do not know anything about these media members. There is no way to learn more about their background, and what makes them credible to vote. In fact, most panelists are unknown to the general public.

Whether it is favoritism or just a consequence that comes with the lack of criteria, the MMA world has witnessed some controversial and even biased voting over the years. The most famous example is what happened after Conor McGregor knocked Jose Aldo out in 13 seconds to win the featherweight title at UFC 194.

Although having the right to vote on UFC rankings is considered a privilege, many well-known journalists and media members actually do not want to participate in this.

The main reason is the conflict of interests. Steven Marocco, the former MMA Junkie employee, said that none of their staff will participate in voting because this is a definition of a conflict of interest. Bruno Massami, one of the panelists, also believes that some people don’t want to accept this role because they may later have problems with fighters and their managers.

Bellator rankings and how their system works are very similar to the one used in the UFC. But these two ranking systems differ in certain areas.

Both include a panel of voters that consists of media members from the MMA industry whose main task is to vote for the best fighters in each division and pound for pound as well.

The first major difference is transparency and the names of people who are given the right to vote are public. Next, all the votes are handled by the “Combat Registry”, which is a third party independent of Bellators or voters.

Lastly, Bellator rankings include the voting criteria and guidelines on how they should act in certain situations. Voters follow strict procedures on how to deal with inactive fighters for instance. Still, the system gives them all the freedom to form their own opinion on who they think are the best fighters.

Who Are the Best UFC Pound for Pound Fighters?

The UFC pound-for-pound best fighters are usually dominant champions who stayed undefeated for many years. Some of the most famous ones are:

The UFC ranking system is a valuable tool. It makes each weight division more organized and gives the fans a look into who are the 15 best fighters of each weight class. However, the way the system works in practice is far from ideal, and there is a lot of room for improvement.

The MMA community needs to have a transparent look into who are the people who work on the rankings. They deserve to know more about their backgrounds, and what makes them credible to have the right to vote. The same stands for the lack of standardization, and criteria voters follow to form their opinions and deal with the specific situation.