The UFC hosts events just about every weekend. Some events are listed as Fight Nights while the others are numbered UFC events. If you are new to the game, you might wonder – what is the exact difference between these two? What do the Numbers Mean in the UFC?

The number after the “UFC” stands for a chronological order of pay-per-view (PPV) events that the UFC has been counting since the establishment of the promotion in 1993. The very first event was UFC 1, and two decades later, the UFC reached a total number of 280 events in 2022 and still counting.

In this article, you will learn all about UFC numbered events. We will explore how PPV shows differ from Fight Nights, and some of the records set over the years.

What Is the Numbered UFC Event?

Numbered UFC events are the biggest shows aired in a pay-per-view form. In order to watch the event, you must purchase the PPV for the price set by UFC and ESPN. For this price, you get high-profile shows where you can see the best UFC fighters perform. These events include most exciting matchups, and in most cases, at least one championship fight.

From the business perspective, PPVs are the most important as these events generate close to 50% of UFC’s total content revenue. Thus, each PPV event includes at least one title fight as the main event, or up to two or three title fights for the biggest events of the year.

However, there have been exceptions where PPV events weren’t headlined with a title fight. The main card on UFC 279 included a non-title match between Nate Diaz and Tony Ferguson, but this is a rare practice.

Apart from title fights, PPV cards also include other popular fighters. Each card consists of high-ranking contenders of a specific weight class, and athletes are matched well to deliver exciting fights. On average, UFC hosts around 12 numbered events per year or one per month. Sometimes, there would be 2 PPV events in one month, and no shows in the other.

The UFC runs PPV shows in the largest and most famous arenas around the world such as T-Mobile on Las Vegas, Madis Square Garden, or MSG Grand. Or, the event could take place in the stadium, as UFC 243 did at “Marvel Stadium” in Melbourne, Australia.

Further, the UFC would invest a lot of resources into the buildup of each PPV event. They would film high-quality video series such as “Countdown” and “Embedded”, host multiple press conferences, etc.

How Much Does the UFC PPV Costs?

ESPN+ is the only streaming platform where you can watch UFC PPV events for the price of $99.99 for new subscribers, or $74.99 for current subscribers. Here is a detailed explanation of how the ESPN+ package works: 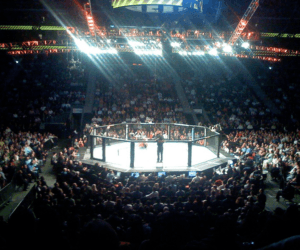 What is UFC Fight Night?

UFC Fight Nights are considered lower/mid-tier events in terms of production and quality of the fight card, and overall, are “weaker” than PPV events. Though these events do not include the biggest stars and best promo materials, UFC Fight Nights do not fall much behind when it comes to the overall entertainment provided by the athletes inside the octagon.

After seven years of Fight Nights being aired on Fox, the UFC signed a new deal with the ESPN+ network in 2018. The deal gives the ESPN networks the right to broadcast 20 Fight Night events per year, known as ESPN+ Fight Night.

Each ESPN+ Fight Night event includes between 12 and 14 matches. Like PPV shows, the broadcast is split into three segments: early preliminary card, preliminary card, and main card. The main event usually sees top contenders within a certain weight class fighting in a title elimination bout, where the winner gets a shot at the tile, or at least makes significant progress in the rankings.

Are you interested in learning about how UFC rankings work and who votes on these rankings? If so check out this recent article.

Fight Nights should not be taken lightly as each event is packed with action. It enables the lower and mid-tier fighters to get a media spotlight and make names for themselves with good performances. Most fighters who compete on Fight Nights are aggressive in their approach to prove their worth, which adds to the quality of fights.

UFC Fight Night events are not free. In order to watch the events live, you must have an active ESPN+ subscription which will cost you $9.99 a month. Or, you can purchase an annual subscription for $99.99 and get two months for free. Bear in mind that this is only for UFC fans based in the US.

If you are living outside the US, you must find out which sports network, online platform, or cable provider is licensed to stream UFC shows in your country and watch the events there.

What is the Difference Between Numbered (PPV) UFC events and Fight Nights?

The main difference is the importance of the event. PPV events are far more important as these are high-profile shows that include the best fighters and championship fights and generate a lot of revenue. Fight Nights, on the other side, falls into the group of low/mid-tier shows reserved for debutants, mid-tier fighters, and contenders.

Here is a list of some other key differences:

Lower and mid-tier fighters on the UFC roster mostly compete in the Fight Night events. You will rarely see the biggest stars on the preliminary or main cards. The main event is, in most cases, a title eliminator fight headlined by two high-ranking contenders of a specific weight division.

Though it does not include the most popular names, the quality of fights and overall entertainment does not fall behind PPV events too much.

On the other side, numbered events are stacked with the most famous fighters and fan-favorite matchups. The main event is, in most cases, a championship fight. The co-main is often a title elimination bout between two contenders, but it can also be another title fight if the show is really big. The rest of the card consists of up-and-coming prospects, fighters with exciting styles, and famous veterans of the game.

UFC numbered events are PPV which means you need to buy a ticket to watch them. The main card is available via ESPN+ and will cost you $124.98 if you are a new subscriber or $74.99 for current subscribers. Fans in other parts of the world might have a cheaper option to watch PPV events on their cable networks, with the price varying between the countries.

Fight Nights, on the other hand, are much cheaper but are not free. You can watch Fight Nights with an active ESPN+ subscription which costs $9.99 a month or $99.99 per year.

UFC hosts more than 40 events each year out of which 12 are pay-per-view or “numbered” events. In most cases, there is one PPV event each month. There are exceptions where there would be no shows in one month, but then the UFC would host two PPV shows in the next one. Still, the UFC rarely organizes two back-to-back PPV events.

On the other side, you can enjoy Fight Nights more often. The UFC hosts these events almost every Saturday, and usually, there will be two or three Fight Night events ahead of the numbered event.

Following is a list of the 10 biggest PPV UFC events in history.

What Is UFC Fight Pass?

UFC Fight Pass is an online library where you can watch all previous PPV and Fight Night events. Fans consider Fight Pass as a “Netflix for MMA fans” where you can find over 20,000 fights from over 40 promotions and different sports.

Apart from regular UFC events, you can also enjoy:

Can You Watch Numbered UFC Events on Fight Pass?

You can watch all UFC events on Fight Pass, but you can’t stream main PPV cards live. The Fight Pass subscription enables you to watch only the preliminary cards for the cost of the membership. To watch the main card live, you need to subscribe to ESPN+ or another platform or cable network that streams UFC events in your country.

However, around seven days after, the UFC will upload the entire event into their Fight Pass library, where all the members can watch both preliminary and main cards for free.