UFC is the biggest MMA promotion that hosts around 40 events each year, with each event including between 10 and 13 fights. And how long do UFC fights last you may ask?

UFC non-title and non-main event fights last 3 rounds while main events and title fights include 5 rounds of action. Each UFC round is 5 minutes long, and there is 1 minute of rest between the rounds. In total, a 3-round match last 17 minutes while a 5-round match lasts 29 minutes.

However, since a lot of fights do not make it to the final bell, what is the average length of the UFC match? How long do events last? Keep reading to find all the answers.

How Long Do UFC Fights Last on Average?

If you combine both men’s and women’s fights, the average duration of the UFC match will be 11 minutes and 17 seconds.

How long UFC fights last is primarily based on a specific weight class. For example, flyweight fights tend to last longer, 11:14 minutes on average as most athletes do not have the ability to generate big power in their strikes. On the other hand, light heavyweight fights last the shortest as the force of the impact is much higher.

Here is a detailed look into the duration of the fights in each UFC weight class.

How Long are UFC Fights and Rounds?

Non-title UFC matches last 3 rounds (and non-main events) while main events and title fights are 5 rounds. Each round is 5 minutes long, and there is one minute of rest between each round. So in total, 3-round fights that go to a decision last 17 minutes, while 5-round fights last 29 minutes.

In order to make MMA a legitimate sport, entertaining, and suitable for a broad audience, the UFC owners decided to push for the regulation in 2000. The final result of their work was the birth of “Unified Rules of MMA”, a set of rules that brought the world the concept of rounds we know today.

However, there are other MMA promotions, such as the Japanese RIZIN FF promotion where rules are not in line with the Unified Rules of MMA, and where the number of rounds and duration differs from the UFC. In Rizin for example, the first round is 10 minutes long while the second and third are 5 minutes. So a 3-round match lasts 22 minutes in total, 7 more than in the UFC. 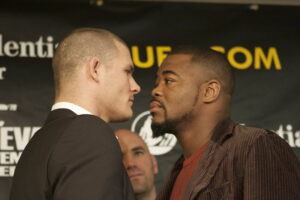 Difference between a 3–round and 5-round UFC fights

The majority of UFC fights are scheduled for 3 rounds, while 5 rounds are reserved only for main events and title fights.

Out of 13 fights on the UFC card (e.g.), 12 will be scheduled for 3-rounds while the last one will be 5 rounds. From the psychological perspective, viewers see 3-round fights more often, while 5-rounds are rare, special, and include two of the best fighters on the entire card.

Having more rounds adds to the importance of the match, and signifies to the audience that something big is on the line. 5 round matches usually include championship fights or fighters who are competing for the #1 ranked position in a specific division.

Further, 5-round UFC matches are more physically demanding and force the athletes to compete for a longer period of time. This enables the audience to watch their favorite fighters battle each other for additional 10-minutes, which adds to the entertainment value, and higher conversion rate when it comes to pay-per-view buys.

Last but not least, more rounds mean more drama. It makes judges’ scorecards more dynamic, and fighters have more time to finish the fight or make a comeback. On top of that, it increases the number of variables as fighters may gas out in the later rounds, lose focus, or suffer an injury.

Duration of UFC Fights in the Early Days

The UFC introduced the concept of rounds at the UFC 21 event hosted in Cedar Rapids, Iowa in 1999. Prior to that, UFC events used to be violent as there were no time limits, rounds, or even weight classes. Prior to the establishment of rules, the events had few restrictions and there were no time limits (rounds) or weight classes. Fighters battled each other until one of them could no longer continue.

Although the majority of matches didn’t last long due to the differences in weight and size, some of the fights would last up to 30 minutes, like the one between Ken Shamrock and Royce Gracie, which lasted 36 minutes at UFC 5. However, the other nine matches from the card all ended within 4 minutes. Overall, the early UFC matches had the potential to last long, but the majority of fights would end after just a couple of minutes.

UFC fighters battled each other until one of them could no longer continue, and in theory, the matches could last forever. All of this made the overall MMA experience boring and less entertaining, which forced the UFC to find a solution and come up with the concept of rounds.

How Long Do UFC Events Last?

UFC events last 7 hours on average. The exact time is based on different factors such as the number of matches on the card, the number of title fights (it can be up to three), how the matches play out, and the production itself.

First, there are different types of events. Pay-per-view or “numbered” events are the biggest ones and include up to 14 matches, and one or two title fights, and often last 7 hours. UFC Fight Nights are low/mid-tier events that include around 10 matches and last about 6 hours on average.

Each UFC event, regardless if it is PPV or Fight Night, consists of three segments: early prelims, prelims, and main card. Each segment of the event is scheduled to kick off at a specified time, and there are no changes based on the results. Even if all the matches end via 1st round finish, other segments will start at the previously scheduled time. For example:

Early Prelims (start time 6:30 p.m. or 7 p.m.) — early prelims are reserved for debutants and fighters with bad records or a small number of fights. On average, there are between 2 and 4 fights on the card.

Prelims (start time 8 p.m.) — include more fights and better quality of competition and last longer than early prelims but shorter than main cards. Prelims consist of between 4 and 5 matches and last around an hour and a half or two hours on average.

The main card  (start time 10 p.m.) — is the most entertaining part of the show. It includes 5 or 6 fights, out of which the main event is 5 rounds. In some cases, the UFC might book two title fights as co-main and main events, both scheduled for 5 rounds. Main cards can last more than three hours.

How Many UFC Fights End in a Decision?

The number of decisions differs a lot between the weight classes, as well as between men and women divisions. Fighters in the lower divisions and women usually do not have the ability to generate one-punch knockout power as heavier fighters could do. And since mass plus speed equals force, you get why finishes are more common among heavier fighters.

The total number of decisions is quite high in women’s weight classes: strawweight 67.1%, flyweight 59.9%, and bantamweight 59.1%.

Decision ratio per each UFC weight class (all time):

How Many UFC Fights End in a Knockout?

The knockout rate significantly differs between the weight classes. Heavier fighters have the ability to generate a lot of power, and knockout opponents more often than their colleagues from the lower-weight divisions. For example, almost half of all the heavyweight fights in UFC history end in a knockout (49.7%) while Light Heavyweight is in second place with a 43.4% knockout rate. The numbers drop when you move to lower weight classes where 23.2% of flyweight matches end in a knockout.

How Many UFC Fights End in a Submission?

On average, 20% of all UFC matches from all weight classes end in a submission. In 2021, 14.7% of fights ended in some type of submission, while that number was slightly higher in 2020 where the submission rate was 18.4%.

The number of submissions per weight class is not defined by weight as it is when it comes to knockouts. Thus, the submission rate is almost evenly spread across all divisions. Lightweight division is in first place with a 23.1% submissions rate, while light heavyweights are at the bottom with 19.2% submissions.