Since the initial UFC event held in 1993, over 49 matches have ended in a draw. However, let’s not forget there are different types of draws, with the majority draw being one of the most confusing ones. What is the majority draw in UFC actually?

Keep reading this article to learn more about different types of draw decisions. 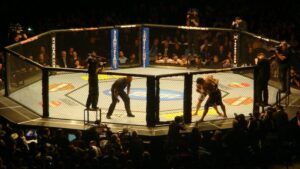 What Does the Majority Draw Mean in the UFC?

If the majority draw happens in a UFC title fight, then the champion will retain the belt and championship status.

How the majority draw differs from the unanimous draw?

In a unanimous draw, all three judges agree that both fighters were equal in all the criteria of scoring. In the majority draw, two of the judges actually outvote the third judge 2:1, which is why it is called the “majority” draw. Though one of the fighters won the fight on one of the scorecards, the match would end as a draw.

Let’s look at some of the examples of UFC majority draws.

Here is a list of some of the most memorable “majority draw” decisions in UFC history.

At UFC 205 event held in Madison Square Garden in New York, Woodley and Thompson have both put on a show. Woodley, a 170-pound champ at the time, managed to win the first round with takedowns and top control. But Thompson managed to keep the fight standing and win the second and third rounds. In the fourth, Woodley went on to score a big knockdown to win the round. But once again, Thompson managed to bounce back in the fifth, and the match ended in a majority draw.

At UFC 256, the flyweight champ, Deiveson Figueiredo put his belt on the line against the Mexican, Brandon Moreno. Both fighters battled over five grueling rounds, with the fight going back and forth the entire time. The initial feeling was that Figueiredo is winning the exchanges and that he would be the winner. But the illegal blow he landed in the third round forced the referee to deduct a point. If it wasn’t for the point deduction, he would have won the decision. But this way, the match ended as a majority draw.

The match between Dawson and Glenn ended up as a high level grappling match between two skilled fighters. Dawson utilized his top level wrestling skills to score takedowns and secure strong top control over the first two rounds. But in the third, Glenn would finally wake up and completely turn the momentum to his side. He dominated the entire round, which secured him a 10-8 on the judges’ scorecards. As a result, two of the three judges couldn’t pick the winner, and the match ended as a majority draw.

What is Unanimous Draw in UFC?

Unanimous draw is a type of decision outcome where all three judges score the match as a draw. Bear in mind that this type of draw does not happen that often in MMA. It is very unlikely to see all three judges agree that neither fighter won the match.

Has UFC ever had a fight ending as a unanimous draw?

The first match in UFC history that ended in a unanimous draw without a point deduction took place in 2021, 28 years after the initial UFC event in 1993.

Why unanimous draws are so rare?

The main reason is the lack of standards when it comes to criteria. The UFC scoring criteria are far from ideal and leave a lot of space for the judges to form their subjective opinions on the fight without relying much on criteria.

Next, MMA is a complex sport, more complex than any other combat sport. There are so many variables and it is very unlikely that the two fighters would be equal in all of the three main scoring criteria.  If you combine these factors you will get why unanimous draws are not that common.

The clash between Gutierrez and Durden was a “regular” match between two upcoming fighters that ended up being a part of UFC history. For the first time, all three UFC judges scored the match as a draw, which was the first unanimous draw in the UFC history (without point deduction).

What is a Split Draw in UFC?

Like unanimous draws, you won’t see many UFC matches ending in a split draw. It usually happens when the fight is really close and the numbers are identical which makes it hard for the judges to decide whether to score it as a draw or give it to fighter A or B.

Examples of the split draw in UFC

To say that Cutelaba and Jacoby have put on a show would be an understatement. These two warriors battled over three rounds, and the fight could have gone either way and no one would say a word about the decision. In the end, one judge had it for Cutelaba, the other one for Jacoby, while the third one scored the match as a draw. As a result, the match ended as a split draw.

The first bout between these two ended with Penn knocking out Uni in just 11 seconds at UFC 34 in 2001. But the two would meet each other once again at UFC 41, in a fight that ended as a split draw. Though the popular opinion is that Penn was a better fighter that night, the numbers were really close.

Edgar vs. Maynard 2 will go down in history as one of the most iconic fights in the history of the sport. The fight was going back and forth right from the opening second, and the two nearly finished each other on multiple occasions over the five rounds. All three judges scored the fight differently and neither fighter was declared a winner.

Final thoughts on the majority draw in the UFC

Unlike in other mainstream sports, a draw is a rare outcome in modern MMA, especially in the UFC. But even when it happens, it is always good to know that there are different types of draws, with the “majority draw” being one of the most common draw outcomes.

Hopefully, this article helped you better understand how the majority and other types of draws work in the UFC.

Welcome to findbestboxinggloves.com! I am Furkan and have been a huge martial arts enthusiast for years. Martial arts have benefited me in so many ways that I wanted to share my knowledge with everyone. Here you can find honest martial arts gear reviews, tips to improve your skills, and more! Bookmark the homepage for updated reviews and weekly new content!