Boxing and kickboxing are two very practical striking martial arts that actually share a lot in common. However, these two also differ from one another mainly when it comes to main techniques as: kickboxing is a mix of kicks and punches, while boxing focuses on punches only. But the ultimate question is: which one is better? 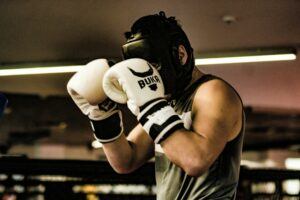 Kickboxing works better in a 1 vs. 1 type of fighting scenario or any type of freestyle fight as it includes more striking techniques. This makes it also a better option if you want to switch over to MMA later, or learn how to defend yourself. But when it comes to fitness and health benefits of training, it’s fair to say that these two arts are very much the same.

Keep reading this article to learn more about how these two martial arts differ from one another and compare in various aspects.

Boxing is one of the most popular, if not THE most popular combat sport that has a really long history. The earliest records go way back to 3000 BC in Ancient Egypt. But as an official sport, it first appeared in Ancient Greece at the famous 23rd Olympiad in 688 BC. The modern variation came with the birth of the famous “Queensberry rules”, put together by John Graham Chambers in 1867.

At first sight, the sport is very simple as the entire concept revolves around punches. There are no kicks, striking with other limbs such as elbows and knees, takedowns, or ground fighting. No, the entire focus is on hand strikes and mixing those together with footwork and head movement. Though it may look simple in the layman’s eyes, boxing has many styles and variations and there is a reason why it is also called the “sweet science”.

Modern kickboxing emerged in the 1950s in Japan. In its initial form, it was designed as a mix of karate techniques and Muay Thai full contact rules. But over the years, and as the sport was spreading across the world, many other styles and variations have emerged.

Kickboxing falls into a group of advanced striking systems. The main goal is to learn how to mix kicks and punches, with basic footwork and upper body movements. Some styles, like the modern K-1, also include knee strikes, but those are seen as secondary techniques.

What Are the Main Differences Between Boxing and Kickboxing?

The key difference is the main techniques. Boxing enables you to strike only with your hands (punches), while kickboxing is a bit more versatile as it includes both punches and kicks. Let’s take a close look at how these two systems differ in the following aspects.

Kickboxing might look complex, and it is to some extent. But, the emphasis is on simple and direct high and low kicks that come from various styles of karate and taekwondo. Punches and the combos students learn are very much the same as the ones in western boxing. Some styles like the “Dutch style” actually put more emphasis on punches than on kicks.

Boxing is quite simple and direct, and this is what makes it lethal. It all revolves around 5–6 different types of punches, and how to mix it all together with footwork and head movement.

The kickboxing stance is very similar to boxing. The key is to keep your feet shoulder-width apart, with the front foot pointing forward and knees slightly bent. The heel of your front leg should be in line with the toe of the back leg, arms up in guard and elbows tucked in to protect the rib cage. The rear hand should be right on the chin, while the lead hand is slightly further in front of your face.

Since they don’t have to worry about the kicks, boxers usually stand in a wide-bladed stance and tend to put a lot of weight on the front leg. Feet should be at shoulder width apart, knees slightly bend, and front foot pointing at a 45-degree angle.

Kickboxing fights are packed with action mainly because the matches are quite short. Here is a brief look at some of the key rules: 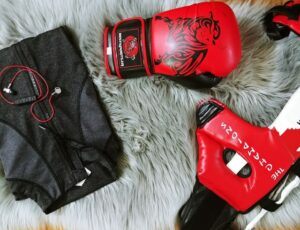 Boxing matches last much longer, which is why the athletes are more strategic in their approach: 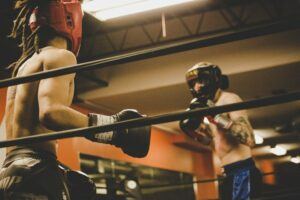 Boxing or Kickboxing For Self-defense?

On paper, kickboxing is more in line with the type of fighting that you may face on the streets. Compared to boxing, it includes more ways of attacking, and overall, more techniques that you can use in various situations. Boxing is not bad by any means, in fact, it may be equally effective. Training in both of these arts:

Though limited in certain areas, boxing is often seen as the best for self-defense due to one simple reason. Most street fights begin with one person throwing a punch or multiple punches, right? A punch is the easiest and the fastest method of hurting a person standing in front. People not trained in martial arts would never throw kicks and other flashy strikes, or go for a takedown.

Boxing teaches you the most efficient ways of defending against this type of attack. You will know how to block/slip the attack, move away and create angles to counter and deliver fast and lethal blows. So overall, the only fair answer is that both of these arts will teach you valuable self-defense skills.

Boxing vs Kickboxing For MMA?

Both kickboxing and boxing are an integral part of modern MMA, a hybrid combat sport that allows you to use different striking and grappling moves together. However, as a more versatile system, kickboxing fits better within the rules and demands of cage fighting. But again, despite its limitations, boxing does not fall back behind too much.

On one side, kickboxing skills enable you to control the striking aspect of MMA. Students learn how to use long-range kicks to do damage from the distance or mix kicks with footwork to create angles and keep their range. When it comes to punches, they have good enough skills to fight at mid-range or inside the pocket. Just look at Israel Adesanya or Alex Pereira if you need any proof.

The biggest downside is the fact that kickboxers clearly lack head movement, and they tend to stand in the center line of the attack. This makes them an easy target for any wrestler or top-level grappler, not to mention the complete lack of the ground game. Boxing excels at close range and when it comes to movement as its fighters rarely stay in the same place and are masters in creating angles. But the downsides remain the same: lack of kicks, clinch, takedowns, and ground fighting.

Kickboxing vs Boxing: Who Would Win In a Fight?

The only fair answer is that both boxers and kickboxers have all the skills and techniques to beat each other in a street fight. Yes, having the ability to kick gives you a certain advantage if the fight is in the open space. But overall, there is an infinite number of variables and possible scenarios.

Kickboxers have better chances of winning if the fight is in the open space. From here, they could demolish boxers with fast and powerful kicks to the calf, thigh, or body. In fact, skilled fighters are capable of generating a force in a kick equal to hitting someone with a baseball bat. A boxer not trained to absorb kicks would crumble down upon receiving the first one.

On the other side, boxing has an edge if the fight is in a closed space like a bar, room, or hall. This is a scenario where kickboxers do not have the space to throw kicks or move around. Boxers may use this to their advantage to quickly land fast and precise blows. They have the advantage in speed, power, head movement, and guard, which is crucial at close range.

Which One Is Better For Fitness and Weight Loss?

You won’t make a mistake choosing any of the two if you are looking to improve your fitness and lose weight. No matter which gym you choose, each class is a full-body workout that will activate and improve every single muscle group in your body. Also, many studies have shown that this specific training improves mental and physical health, and has many other benefits.

The best thing about both of these martial arts is the fact that most gyms around the world have adapted to the modern lifestyle. Or in other words, each gym includes an amateur group where you can train at your own pace and according to your abilities. The amateur classes are, in most cases, less intense, have less sparring, and overall, the focus is on developing proper technique and giving your body a great workout.

Kickboxing might be a better option simply due to the rise of “cardio kickboxing” classes all around the world. The emphasis here is on burning calories in getting your body in top shape through martial art training. The only downside is the fact that you won’t develop any real fighting skills.

Which One Is Harder to Learn?

Becoming proficient in any martial art is hard, and for many, a lifelong journey. The same stands for these two striking arts where you won’t earn anything without pain, sacrifice, and hard work. Which one is harder is an individual thing as some people might have an easier time in boxing while others might enjoy kickboxing more. It all depends on the factors such as:

Kickboxing consists of various kicking and punching techniques. This also means that the number of variations of each move and overall combos that you have to learn is much bigger than in boxing where the entire focus is on punches.

On average, students need around 2 years of kickboxing training to develop solid skills. This is only in case you are a dedicated and consistent student with an average talent for the sport. Boxing is a simple martial art where the progress is much faster and it usually takes 1 year of consistent learning to develop the same level of skills.

It’s really hard to tell which one is more intense as both embrace hard methods of teaching. Classes are cardio intense, there is very little rest, and emphasis is on hard full contact sparring that is really hard on your body.

Boxing vs. Kickboxing – Which One is Better For You?

Boxing and kickboxing are two very similar martial arts. Which one is better for you truly depends on your personal preference and the goals you want to achieve on your journey.

One thing is for sure, you won’t make a mistake choosing any of these two. Both boxing and kickboxing share a lot in common, and you can always switch from one to the other if you are not satisfied. Yes, these two differ in certain areas. But the fundamentals are the same and you can adapt really quickly.

Kickboxing should be your choice if you want to develop an all-around striking game and learn how to kick. The skills you develop are more practical in a self-defense situation, and you will have an easier time transitioning to MMA later if you want to. When it comes to improving fitness, it shares the same benefits as boxing.

Boxing is also great, even better in some areas. It is a great option for beginners because, on one side, it is relatively easy to learn, but on the other, intense enough to help you get in top shape and teach you how to fight. Most people choose to develop a strong base in boxing, and later on, switch over to kickboxing or MMA.