New fans of boxing frequently ask numerous questions about the format of boxing. One of the most asked questions is, how long is a boxing match?

It’s a simple question that has a complex answer. Let’s dive in and go over just how long a boxing match is.

How Long Is a Boxing Match?

All of which have different fight durations than the other.

How Many Rounds Are in a Boxing Match?

We’ll expand further on the reasons for the duration of rounds in the section below.

Amateur boxing is the level that boxers fight at before possibly moving up to the pro level. In this type of boxing, competitors must wear headgear during their competitions. They also receive no pay since they are at the amateur level.

How Long Is an Amateur Boxing Match?

Female amateur boxers also compete for eleven minutes but compete in bouts that are four rounds. 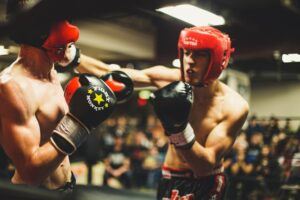 Olympic boxing is a style of amateur boxing but consists of the most talented amateur boxers. The big difference between each style is that headgear is now no longer required in Olympic boxing matches.

Olympic boxers must also win an Olympic qualifying tournament to make their Olympic team. These tournaments are organized by governing bodies like the International Boxing Association. (IBA)

How Long Is an Olympic Boxing Match?

The length of an Olympic boxing match depends if the contest is between men or women. Rounds of a men’s bout in the Olympics are three minutes, and women’s bouts are two minutes. Men’s matches are also only three rounds long, while women’s matches are four rounds long

Boxers within the youth divisions are like amateurs matches, which require headgear during their bouts.

How Long Are Youth Boxing Matches?

Youth boxing matches don’t all have the same fight duration. This is because, within youth boxing, different categories of age and skill levels fight different durations.

Boxers in the bantam division fight rounds that are one minute each. This puts their bouts at a total of five minutes with three minutes of fighting and two minutes of rest.

Boxers that are in the junior division are kids between the ages of eleven and twelve years old. They fight for the same amount of time as the bantam division. Three rounds at one minute a piece with two rest periods for a total match length of five minutes.

The intermediate divisions in youth boxing consist of teens between thirteen and fourteen. Their matches are three rounds that are one and a half minutes each.

The senior-junior Olympic level is the last youth division before teens move to the adult amateur divisions. These young fighters fight three rounds that are two minutes each.

That puts the total match time for a senior-junior Olympics division bout at nine minutes. In that time, boxers fight for six minutes and rest for three minutes.

Professional boxing is the highest level of competition that you can reach in the sport of boxing. This form of boxing is where the best

How Long Is a Pro Boxing Match?

These men’s boxing bouts consist of three minutes and a minute rest between rounds.

Four-round boxing matches are the level for new pro boxers to compete at until they gain more wins and experience fighting. These types of boxing matches last a total of fifteen minutes.

In those fifteen minutes, the boxers fight for twelve minutes and have three rest periods.

A six-round boxing match is where potential contenders try to make a name for themselves and climb the ranks. Six-round contests last a total of twenty-three minutes. Consisting of eighteen minutes of fighting and five rest periods of one minute between each round.

Eight-round boxing matches are where contenders fight to move into the top ten of their division. Contenders will either fight another contender or fight a lower-level fight to pad their record.

Ten-round boxing matches are where the top 5 fighters in a division compete to see who will earn a title shot. These types of boxing matches last a total of thirty-nine minutes. Consisting of thirty minutes of fighting and nine rest periods of one minute between each round.

Twelve-round bouts are the title matches in boxing where the best boxers in the world fight each other. Title bouts in boxing last a total of forty-seven minutes. Consisting of thirty-six minutes of fighting and eleven rest periods of one minute between each round.

Women’s pro boxing is the highest level of competition that female boxers can reach. It took decades for women’s boxing to get the respect it deserves, but female boxers are finally getting the spotlight.

How Long Is a Women’s Pro Boxing Match?

Women’s pro boxing also only has 4 types of match formats:

Six round women’s pro boxing bouts like men’s bouts are where potential contenders make a name for themselves. These types of women’s pro boxing matches last a total of seventeen minutes. Consisting of twelve minutes of fighting and five rest periods of one minute each.

Eight round matches in women’s boxing are both for contenders and fights to decide who fights in title bouts. These bouts last a total of twenty three minutes. Sixteen minutes of fight time with seven rest periods of one minute each.

Women’s title bouts in boxing last a total of twenty nine minutes. Consisting of twenty minutes of fighting and nine rest periods of one minute each.

Did Pro Boxing Matches Use to Be Longer?

If you watch old boxing matches, you’ll notice that the bouts back then were longer. This is because early on in the sport of boxing, there were no time limits in boxing.

It was normal for boxing bouts to last for hours if neither fighter would quit or get counted out. The record for the longest boxing match ever was set in 1893 between Andy Bowen and Jack Burke.

This fight lasted over 110 rounds, which equaled seven hours and nineteen minutes.

During the 1920s, boxing governing bodies agreed that boxing title bouts would not surpass fifteen rounds. Fights would last for forty-five minutes with one-minute rest periods between the rounds.

This would be the format for pro boxing title bouts for the next sixty years until the 1980s.

In 1983, Ray Mancini would face Duk Koo Kim in a lightweight title fight. In the fourteenth round, Kim would die from damage sustained from punches.

The death of Kim led the World Boxing Association (WBA) to change its rules for rounds in title fights. From then on, title fights would be twelve rounds instead of fifteen rounds.

Will There Be More Changes To The Length Of Boxing Matches In The Future?

No boxing governing bodies (pro or amateur) has announced plans to change the time limits of matches. Some women’s pro boxers have pushed to have rounds be three minutes like men’s bouts, but that’s it.