Watching the UFC events, you have likely heard people using the term “undisputed champion” quite a lot. But what undisputed UFC champion means, and after all, how does it differ from other statuses?

Each UFC fighter who wins the belt by beating the champion receives undisputed status.

In this article, you will also learn how undisputed status differs between UFC and boxing. Also, we will explain the difference between interim, undefeated, and undisputed champions.

What Does Undisputed Champion Mean in the UFC?

UFC undisputed champion is a fighter who wins a title in a specific weight class or more than one weight class. The term signifies the only legitimate champion of that weight class and he/she keeps this status until they either:

Every fighter who wins the UFC title by beating the legitimate champions becomes the “undisputed” king of the division. Even if they later lose the belt and come back to win it again, they would come to be undisputed again.

The only time the UFC belt is disputed is when the champ is inactive, and the division gets the interim champ. But more about that later in this article.

What is the Difference Between the Undisputed Champion in Boxing and UFC?

The term undisputed and its meaning differs a lot between UFC and boxing. The main reason is the fact that boxing has many governing bodies, while MMA has only one. Here is a detailed explanation.

Boxing has dozens of different organizations out of which the following four are the major governing bodies:

Each of these four organizations includes 17 different weight classes. The champion of each weight class, regardless of the promotion, has the right to be called the world champion.

But to become undisputed they must win the belt in a specific weight class in all four promotions. Or in other words, they must beat four other titleholders to earn the undisputed status. Here is how it works in practice:

In 2020, Canelo Alvarez, a WBO and WBC super-middleweight champion at the time beat Callum Smith to win the WBA title. Just one year later, he stopped Caleb Plant in the 11th round to win the IBF super middleweight title. This way, Alvarez obtained belts in all four governing bodies, which secured him undisputed status.

Some other boxing undisputed champions are Oleksandr Usyk, Bernard Hopkins, and Terence Crawford.

The sport of MMA has only one major organization, the Ultimate Fighting Championship (UFC). So when a UFC fighter wins the title in a specific weight class, they are in no dispute with no one.

There are no other governing bodies like there are in boxing so every UFC champion is actually the “undisputed champion”.

But why would the UFC adopt this term and give it a different meaning? Well, the only logical explanation is that being the “undisputed” champ contributes to the legitimacy of the status.

Throughout UFC history, there have been many dominant undisputed champions like: 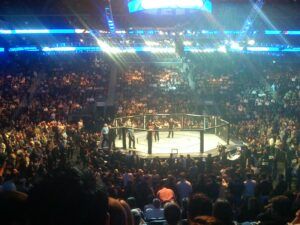 What is an Interim UFC Champion?

When the undisputed champion is inactive and unable to defend the title in a reasonable time, the UFC would arrange a fight for the interim title between the number one and two ranked fighters in that weight class. The newly crowned interim champion takes the throne until the undisputed champion comes back, and then the two must fight in the unification bout.

What is Unification Fight in UFC?

The existence of an interim title makes the undisputed belt disputed. Thus, the unification bout is a match between the undisputed and interim champions. To earn an undisputed status, the two must unify the belts by beating each other.

The unification bouts are among the biggest and most popular fights. Ahead of the event, there is usually a lot of trash talk, with both fighters claiming they are the “real” and only king of the weight class. This also makes it easier for the UFC to promote these matches.

One of the biggest unification bouts was the one between Jose Aldo and Conor Mcgregor. At the time, Aldo was a 145 pound undisputed champ, while the Irishman was the interim champ. After months of trash talk, the two met each other at UFC 192 to unify the belts. But the fans were in for a short one as McGregor managed to knock out Aldo in just 13 seconds.

Why Does the UFC Create Interim titles?

The UFC creates Interim belts to keep the division moving forward and fighters active. In some cases, champions could be away for a couple of years, which slows the division down.

In order to keep the division active and fans interested, the UFC would create the interim belt. This enables the fighters to keep training, competing, progressing, and earning money.

What is the difference between Interim and Undisputed UFC champions?

On paper, both Interim and Undisputed champions enjoy the same status. Both are seen as legitimate champions by the UFC.

But in the eyes of the fans, things are a bit different. Despite being away from the sport, the undisputed champ remains the “real” king of the weight class. An interim champ, on the other side, remains the number 1 contender.

Interim champions are not seen as “real champions” by the fans, and even fighters know this. For example, when Justin Gaethje received the interim belt after his win over Tony Ferguson at UFC 249, he threw it away saying “I want the real one”. He later failed to unify the titles after losing to Khabib Nurmagomedov.

Dustin Poirier, the former Interim lightweight champ also shares the same feeling. During his interview with the UFC.com, he publicly said that he is happy to be the interim champ, but to be the undisputed world champion represents his ultimate goal:

“I’m definitely proud of the interim title, but if I got injured and could never fight again or if I decided to stop fighting one day without that accolade of being the undisputed world champion, it doesn’t feel complete to me”

What is the Difference Between Undisputed and Undefeated in UFC?

Undefeated UFC fighters are the ones who have never suffered a loss in their MMA careers or inside the UFC octagon. Undisputed champions are fighters who hold the title in one or more weight classes. They can also be undefeated if they have never lost a match.

If you want to learn more about no contest, check out this recent article on my site.

The only UFC fighter (as of 2022) who managed to retire as both undefeated and undisputed champion was Khabib Nurmagomedov. In 2021, he retired with a record of 29 wins and 0 losses, and as an active undisputed lightweight champion.

What are UFC Pound-for-Pound Rankings?

The term pound for pound comes from boxing where the popular network “The Ring” introduced this type of ranking in 1990. Later on, many other combat sports would adopt this concept, including the UFC in 2013. Bear in mind that each MMA network has its own unofficial ranking list such as Sherdog, ESPN, and Tapology.

However, there is one major downside. Pound for pound best fighter is supposed to be the one who has the skills to beat all champions from all other upper or lower weight classes.

This creates a big problem because you will never see a UFC featherweight champion competing against the light heavyweight or heavyweight. Yes, this sounds crazy and dangerous, but it is the only way you can determine who the pound-for-pound best fighter really is.

Instead, pound-for-pound rankings are based on the accomplishments, records, and dominance of a champion within a one-weight class or more.